Cows and Sheep aren’t the only species touched by the hand of domestication. Microbes have been domesticated for just as long as many traditional 'farm animals.'

If asked to name a few domesticated animals, I’m sure most of us wouldn’t have any issue listing a handful of barnyard animals such as cows or pigs, or (man’s best friend) the lovable dog. But there’s a silent section of our domesticated menagerie that doesn’t get as much press despite their ubiquity and numerous contributions: the easily overlooked microbe! The small yet mighty Saccharomyces cerevisiae, or baker’s/brewer’s yeast, is one of our earliest domesticated ‘livestock’ but is only one example of a domesticated microbe [1-3]. Virtually all fermented products are the result of domesticated microbe labor. I’d like to highlight some of these fascinating ‘micro workhorses’ but first, shed a little light onto what ‘domestication’ actually is.

Figure 1. A photo of a levain (left), a sourdough precursor made using S. cerevisiae, and a light microscopy image of Aspergillus oryzae (right), which is used in sake fermentation. These images show some of the products and players involved in microbial domestication. Source: Wikimedia Commons (left and right)

Although a colloquial definition could be that any animal on a farm is domesticated, I don’t think this is a comprehensive answer. Numerous animals such as ostriches and alligators are maintained as livestock, but I don’t think many people would initially label them as ‘domesticated.’ The true definition of domestication is of course more nuanced, and filled with hard to read academic verbiage which is still being argued over and refined [4]. Nevertheless, its essence is that a domesticated organism (plant/animal/microbe, etc.) has been selectively bred over generations for a specific resource, and this selective breeding results in a ‘fitness’ advantage for the organism in question [4]. How does this impact humans? Domesticated organisms produce more of a particular resource (think sheep’s wool or large tomatoes from the vine), and in macro animals they are often more docile. Early farmers would see which cows or crops grew bigger and produced more, and then selectively breed those individuals because they saw the trend that their offspring would likely also grow bigger and produce more product on average. This process is repeated over generations, tailored based on the attributes the farmer/consumer is interested in, eventually resulting in the domesticated variants we see today.

As mentioned above, probably the best known domesticated microbe is S. cerevisiae, commonly called baker’s/brewer’s yeast, but it is by no means the only one. Aspergillus oryzae, a fungus, is responsible for sake fermentation [5]. Several different Penicillium species, also a fungus, such as roqueforti or glaucum are involved in cheesemaking [5]. The bacteria Zymomonas mobilis is involved in both tequila and pulque production [5]. Much in the same way as larger animals were domesticated, all of these microbes were domesticated through the continued propagation of batches of the respective food that had the most desirable attributes [5-6]. Interestingly, unlike the macro barnyard animals, micro domestication is more often a direct selection of specific genotypes and the desired attribute is commonly a metabolic product. Additionally, the human selection of certain properties (such as alcohol content in many of these examples) creates an environment that selects against less tolerant ‘contaminant’ species over time. This gives rise to that ‘fitness’ advantage piece of domestication that I noted earlier. So our microbe buddies aren’t just making our food tastier, they can make it safer too! 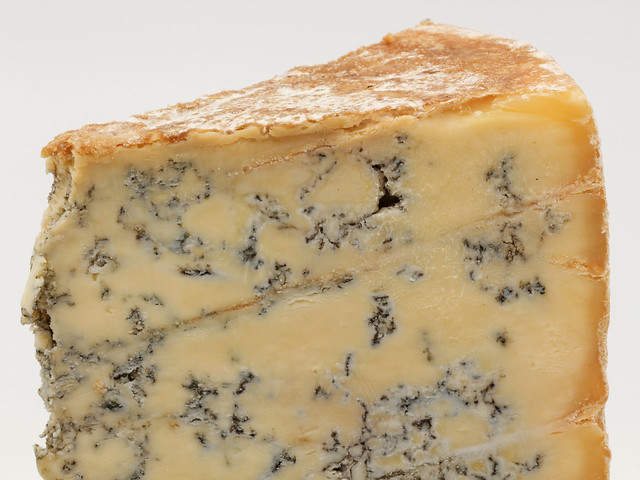 Figure 2. A photo of Blue Stilton, a cheese produced by Penicillium roqueforti, which is visible as the blue/green veins throughout the cheese. Source: Wikimedia Commons user Coyau

In summary, microbial domestication typically produces little ‘factories’ that churn out the specific chemical we are interested in, often in such high levels that they prevent other microbes from growing in the same environment. A research lab here at UMass led by Dr. John Gibbons is currently studying the process and associated genetic changes of microbial domestication and has numerous interesting publications related to the subject if you are interested in reading more. So although they may be small, domestic microbes should not be overlooked! To shine more attention on these important domesticated organisms, I’m going to follow up with a second post related to the contribution of yeast to fermented beverages (specifically beer), so keep an eye out. If there are other microbe related questions you have, let me know in the comments section below!