Jumping spiders have a complex visual system, and here's how it works.

There is striking diversity in the visual systems that have evolved in arthropods, which include insects, arachnids, crustaceans, and myriapods [1-2]. For example, many insects and crustaceans have compound eyes consisting of thousands of smaller individual optical units called ommatidia, each of which produces a small fragment of a larger mosaic image (Figure 1). Others have simple eyes that contain a single lens and function similarly to a camera. A particularly unusual visual system can be found in jumping spiders. I recommend you familiarize yourself with this article for an introduction of how their eyes work before reading on! 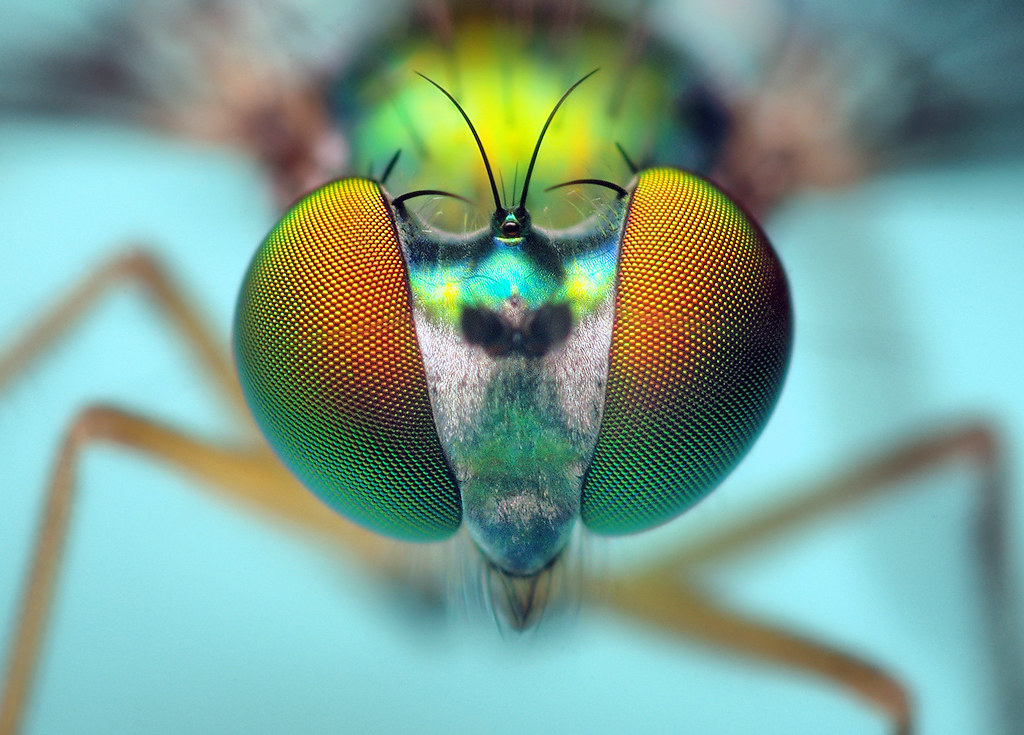 Jumping spiders have excellent vision and are thought to have spatial acuity, which is the ability to discriminate between points separated in space, ranking among the best of all invertebrates [4]. Not surprisingly, these spiders use vision as their dominant sense to forage, avoid predators, find mates, and otherwise navigate their environment. Jumping spiders have eight total eyes, arranged in four pairs located in a row on the front of the cephalothorax (the fused head and thorax structure of spiders). If you think you might have stumbled upon a jumping spider, look at their eyes. This arrangement is unique to jumping spiders and gives them their characteristic appearance (Fig. 2). The principal eyes, also known as the anterior median (AM) eyes, are the largest and most forward-facing pair [4]. These eyes have a narrow field of view (around 3°) but have high visual acuity (sharpness of vision) and moveable retinas that enable them to increase their field of view through scanning [5-6]. The secondary eyes consist of the forward-facing anterior lateral (AL) eyes, the posterior lateral (PL) eyes, and a reduced pair of posterior median (PM) eyes, all of which have lower visual acuity than the AM eyes [4]. The secondary eyes have overlapping visual ranges that provide a nearly 360° field of view, and function similarly to motion detectors [4, 7]. All eight of these eyes are simple eyes, meaning they each have a single lens (just like humans), but do not be fooled by the terminology as what they can achieve together is quite impressive! 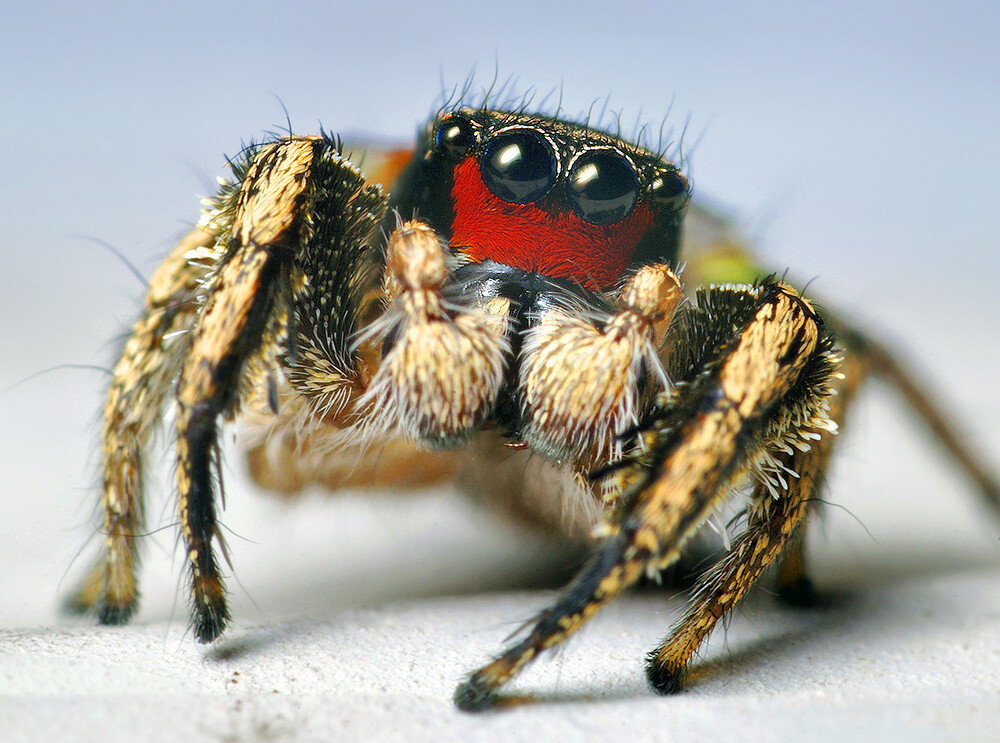 Although different visual responsibilities are distributed across each set of eyes, they all still interact with each other. Interestingly, the principal and secondary eyes have different neural pathways that converge, meaning visual information travels separately and then is integrated in the brain. Although the principal eyes have a fixed lens and small field of view, the forward-facing anterior lateral eyes can direct the principal eyes towards movement, while the posterior lateral and posterior median eyes can signal to the spider to reorient their entire body [8]. Once the spider is able to lock onto their target with their principal eyes, they are able to see it with much greater resolution. The principal eyes have boomerang shaped retinas, which are the structures that enable vision by turning light into nerve signals that reach the brain. The visual acuity of the retinas are determined by the density of photoreceptors, so a greater density allows for better vision [9]. The center point of the boomerangs, also called the foveal region, have the highest density of photoreceptors and are directed to an object during selective visual attention (Fig. 3). 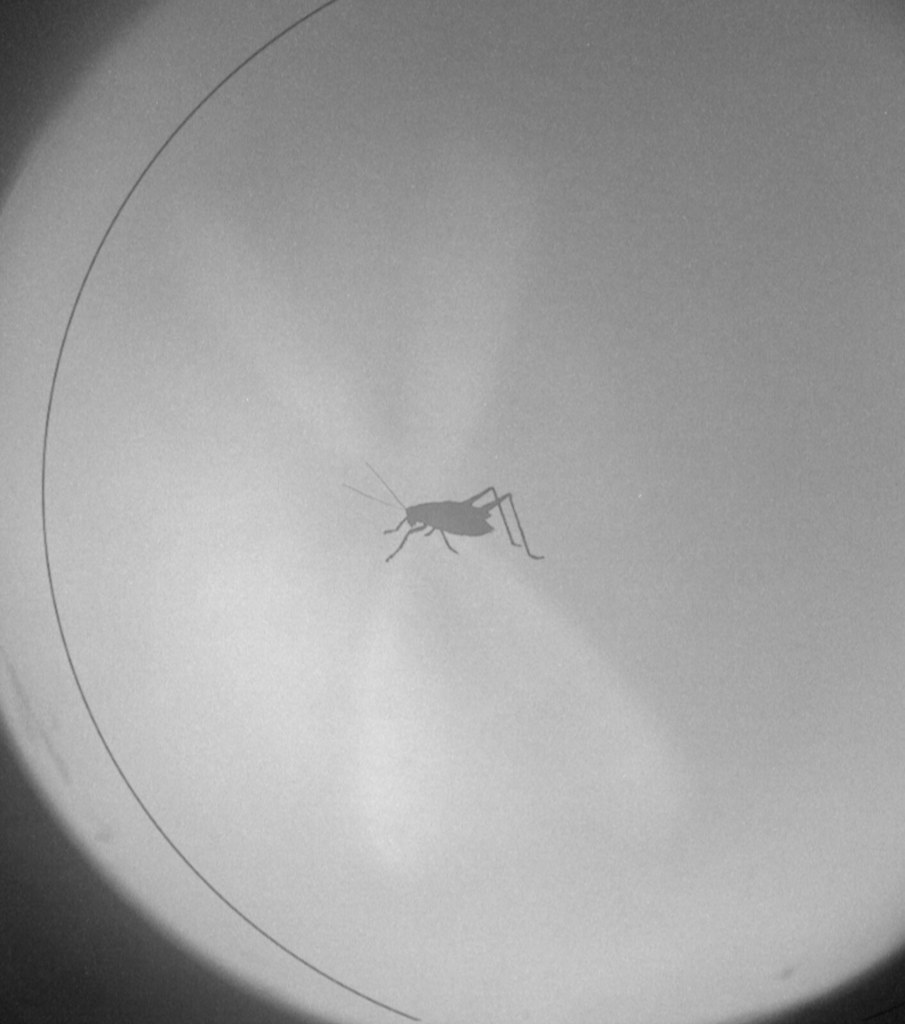 Incoming light passes through the corneal lens where it is magnified and projected onto the retina. Jumping spider retinas are semitransparent and have four layers, each of which have photoreceptors that are maximally responsive to particular wavelengths [6]. Light is electromagnetic radiation consisting of photons traveling in a wave-like pattern. Usually light consists of a combination of wavelengths, each of which correspond to particular colors when they reflect off objects. Most jumping spiders have dichromatic vision, meaning their photoreceptors are most sensitive to either UV or green light (except for one unique case described later). The light is subsequently absorbed by photopigment molecules called rhodopsins, which are effective at capturing photons of different spectral wavelengths [9]. When light passes through the lens, a process called chromatic aberration occurs, in which different wavelengths are focused at different distances. This is because the lens has wavelength-specific refractive indices, meaning different colors of light separate and bend at different angles. Jumping spiders are able to ‘correct’ this by having focal points at each retinal layer. Shorter wavelengths are focused closer to the lens, so unsurprisingly UV sensitive photoreceptors are closest to the lens whereas green sensitive photoreceptors are in the deeper layers. If the jumping spider retina was not layered, then certain colors of a visual image would be blurry and out of focus; by absorbing light at different distances, all of the colors can simultaneously be in focus.

Arthropod eyes are often too close together to use binocular cues such as stereopsis, where the brain interprets the combined visual input of both eyes, for depth perception. Many insects like the praying mantis solve this issue by using a monocular depth cue called motion parallax, in which closer objects are perceived to move faster than farther objects. Alternatively, jumping spiders use image defocus, in which farther objects are blurrier than closer objects, to make accurate estimations of depth [10]. When illuminated wavelengths of light are manipulated during behavioral experiments, spiders lose their ability to perceive depth and will miscalculate jumps to a target [10]. This is because light of a single wavelength distorts the amount of defocus that can occur due to chromatic aberration.

It was once commonly thought that jumping spiders only have dichromatic color vision, maximally sensitive to UV and green light. However, many behavioral studies suggest that some of these spiders are able to see red, even though it appeared they did not have photoreceptor cells sensitive to longer wavelengths. For example, spiders could be trained to learn the color red when it was paired with an aversive stimulus such as heat [11]. In addition, many male spiders display their bright colors during ritualized courtship dances (Fig 4), suggesting that sexual selection was acting on color patterns. Zurek et al. elegantly described a mechanism in which ‘spectral filtering’ allows Habronattus jumping spiders to perceive red, thus enabling trichromatic color vision, just like in humans [12]. 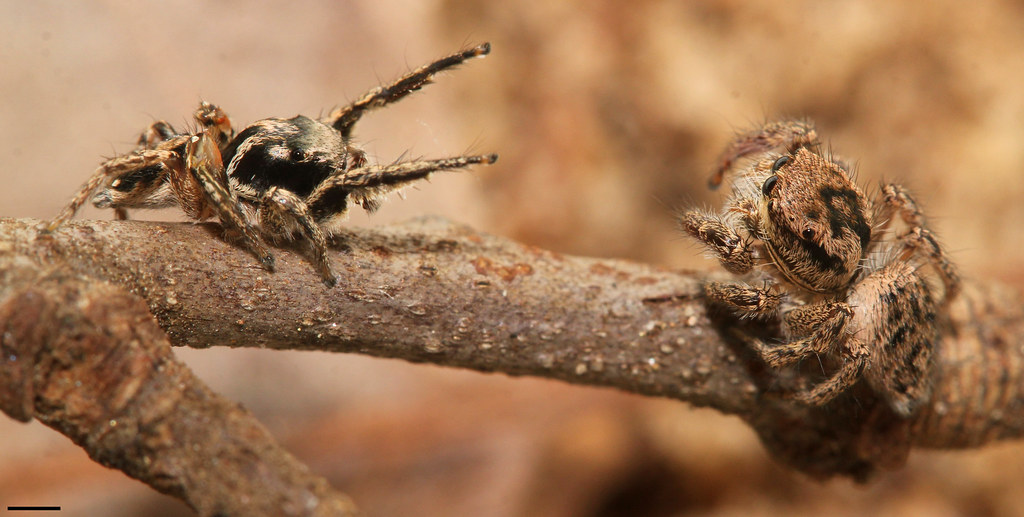 Red photostable pigment in the form of an oil droplet blocks the path of incoming light in a small section of foveal photoreceptor cells, only allowing longer wavelength light to pass through to the retina [12]. By shifting the peak sensitivity of a subset of photoreceptors from green to red, these spiders are also able to see the color red. The visual physiology of Habronattus pyrrithrix jumping spiders, therefore, demonstrates that trichromatic vision has been achieved in spiders. This discovery has a lot of interesting implications, especially considering many prey species use long wavelength colors as visual warning signals (see my 2019 article on aposematism).

The jumping spider visual system is very unique in the animal kingdom, particularly compared to the human visual system. These spiders are found on every habitable continent in the world, so you probably have seen one even if you didn’t realize it. Next time you see a jumping spider, pay close attention because it might be looking back at you!

« Climate Disaster? Humans Will Pass Point of No Return Sooner Than We Think
Archive
Why Wash Your Hands? »