What time you’re eating may be more influential than what you’re eating, according to a collaborator of Nobel Prize recipients.

Our circadian rhythms (our body’s internal clock system) affect many different aspects of our lives, including susceptibility to health complications such as diabetes, obesity, and bipolar disorder [3]. In fact, the impact of circadian rhythms on health is so great that the 2017 Nobel Prize in Physiology or Medicine was awarded to three scientists studying the topic. Drs. Jeffrey C. Hall, Michael Rosbash and Michael W. Young found three genes called “period” (Per), “timeless” (Tim), and “doubletime” (Dbt) that control our internal concept of what time to be awake and what time to sleep. They found that, in a fruit fly model, these genes contain the code for a protein that fly cells have a lot of during sleeping hours and break down during waking hours [3]. Basically, they figured out how we determine when to be awake and when to rest without external cues such as daylight to tell us. 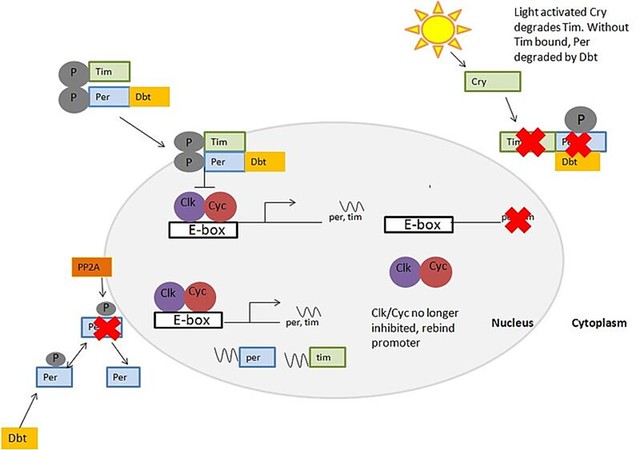 Figure 1. Genes Per, Tim, and Dbt work together to regulate our circadian rhythm every day. During the day, light activates cryptochrome (Cry), which degrades Tim, allowing Dbt to degrade Per. Therefore, Per and Tim stop blocking Clock (Clk) and Cycle (Cyc) transcription factor, resulting in mRNA transcription and subsequent protein formation during the day but not at night. Source: L.Sandieson

Their collaborator, Dr. Joseph Takahashi, recently came to UMass to give a seminar talk about some similar studies he has conducted in mice. A major goal of Dr. Takahashi’s is to determine what factors most affect weight loss and life extension: the amount of calories you take in or when you eat them. To find the answers, he created several test groups of mice and compared their body weights over 18 months.

☼● One group could eat as much as they wanted and whenever they wanted of a high fat diet.

● Another group could eat as much as they wanted of the same diet but only for the 12 hours they are normally awake, which for mice is at night.

☼ A third group was similarly time restricted but could only eat during the 12 hours of day, when mice are normally asleep.

● Yet another group could eat only a set amount of calories at night.

☼ The final group was also calorie restricted but could only eat during the day.

The only group of all five to lose weight was the calorically restricted mice who fed at night (during their normal waking hours) but not during the day (when they should be asleep). The calorie restricted group that ate during normal sleeping hours did not lose weight comparatively [2]. This might mean that when you eat is more influential than how much you eat.

Interestingly, those who could eat as much as they wanted but were time restricted to eating during the day didn’t take in as many calories as those who ate at night. I guess we’re just not as interested in eating when our bodies are telling us to be asleep. The good news is that eating during the time when you’re supposed to be awake is better for you anyway. As a human whose internal clock tells you to be awake during the day and sleep at night, you’re generally healthier and live longer when you eat most of your food early in the day and taper off as you get closer to night time [4]. Although Dr. Takahashi’s research was not conducted in human subjects, his results in mice have implications for humans because of inter-species similarities. 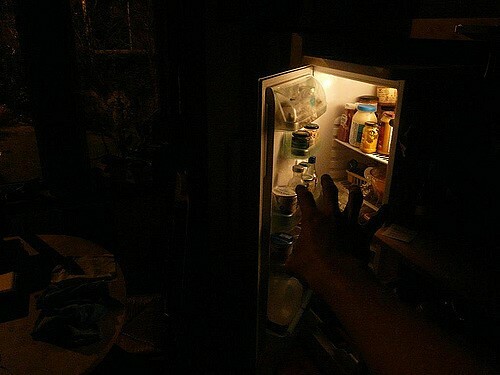 Figure 2. Midnight snacks can be tempting but probably should be avoided. Source: Sean Murray

Dr. Takahashi’s data is exciting because it may tell us that the amount of calories you eat is not as important as when you eat. This is due in part to regulation of bodily functions by the previously mentioned circadian genes Per, Tim, and Dbt. Of course, your body still requires certain nutrients to function properly, but this might explain why that diet you’re on hasn’t been helping you shed weight like you thought or make you feel more energized and healthy. If you are calorie conscious, think about when you are eating your largest meals. It’s possible that your midnight snack, although only half a sandwich, is doing more harm than having two sandwiches for breakfast. Bottom line: eat more calories earlier in the day and fewer later. You might lose weight, become healthier, and live longer!

« Bug Sleuth – One Entomologist’s Mission to ID a Mysterious Swarm of Wasps
Archive
Life, the universe, and everything: Dreams of being a biophysicist »