This past fall, I came across a swarm of wasps and did not know what they were. For an entomologist, that’s scarier than the swarm itself, so I did some sleuthing.

Last fall, my lab-mate and I found a swarm of wasps hovering around the hood of one of our lab cars. Rather than be freaked out about the presence of dozens of wasps and the potential of being stung, we were concerned that we didn’t know whether these were hornets, yellow jackets, or another type of wasp. As entomologists, not knowing was more terrifying than the presence of the wasps themselves! 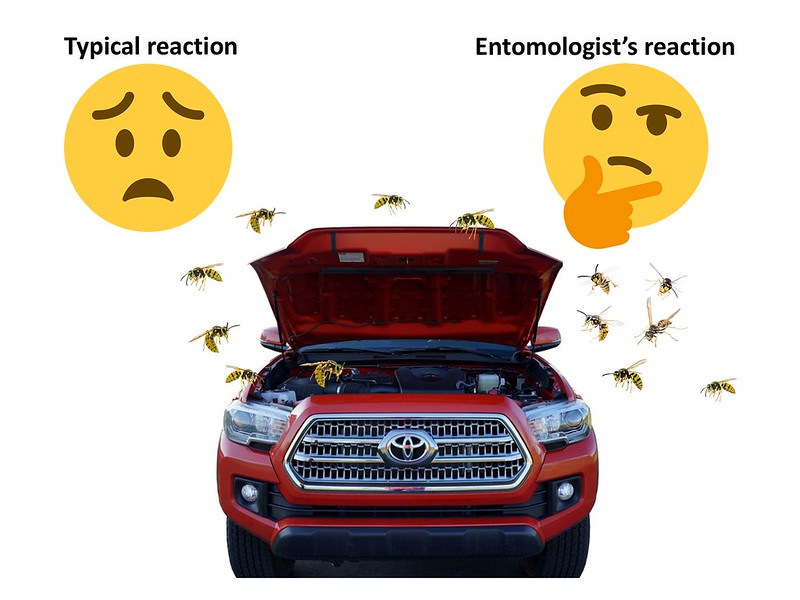 Figure 1. As an entomologist, not knowing the identification of the wasp species in question was more terrifying than the presence of the wasps themselves! Image credit: Modified from Wikipedia Commons, CJOffRoad, A. Santillana, pxhere, and Trounce.

To alleviate my unease I took the time to educate myself in wasp identification, and I thought I’d make that information available to any interested TLS followers.

By a few key characteristics (e.g. slender body and legs; relatively few hairs; narrow petiole or “waist strong, angular, and glossy wings), I knew that the insects in question were wasps, but I didn’t know what type of wasp. To get us all on the same page, let’s start out by discussing wasps.

Wasps are in the order of insects called Hymenoptera. This group includes bees, sawflies, and ants, as well as wasps. 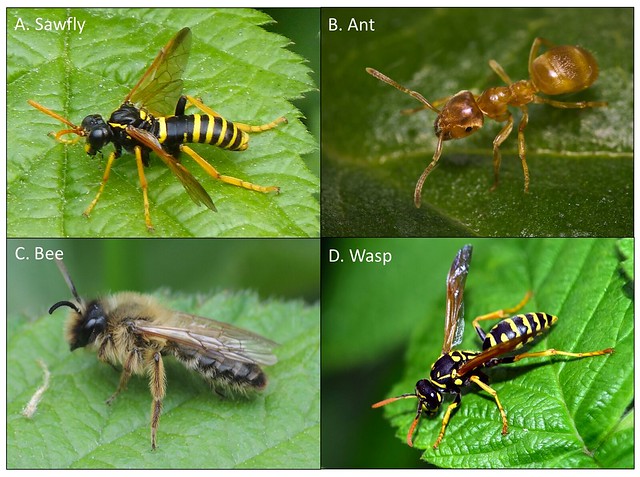 Figure 2. Within the order Hymenoptera are sawflies (A), ants (B), bees (C), and wasps (D). This post will focus on one particular type of wasps, the vespids. Image credit: Modified from gailhampshire (A) AJC1 (B), Orangeaurochs (C), and ulleo (D)

Yellow jackets, hornets, paper wasps, potter wasps, and mason wasps are a few types of wasps; in my mind, they are all on the list of potential suspects for the swarm. I’ll outline each of these possible suspects in turn.

Unlike paper wasps, hornets, and yellow jackets, they are solitary wasps; they do not live in colonies and do not swarm [1]. Similar to the types of wasps above though, they are typically black with yellow markings. There is a lot of variety in where and how they make their nests, including a dead twig or log, an underground burrow, or a rocky crevice. In all cases though, they make individual cells for their larvae out of mud or clay (thus their name) [1]. Because potter and mason wasps don’t live in colonies and thus don’t swarm, they are an unlikely culprit for the swarm of wasps around the lab car.

Paper wasps are typically elongate and slender in shape, colored a reddish brown sometimes marked with yellow [2]. They make nests of a papery consistency by chewing up woody material and using their mandibles and front legs to shape it into a desired form [3]. They sculpt the paper into a matrix of cells formed in a circular shape attached by a slender stalk to a branch, eave, or another elevated location [1]. Like potter and mason wasps, they use the cells as ‘cribs’ of sort for their larvae. Also like potter and mason wasps, paper wasp adults eat nectar and fruit juices, but hunt for small insects to feed their young [2]. Mature colonies can have up to 30 adults, but in temperate areas typically only one female, the young queen, overwinters. She will be the sole survivor of the colony and will start a new colony the following year! 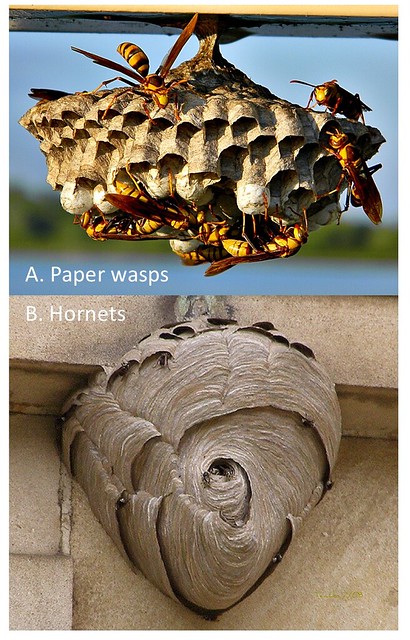 Figure 3. Paper wasps (A) and hornets (B) both make papery nests, but they look quite different. Paper wasps’ nests are also hooked to a surface with a short narrow stem while hornet nests are formed directly onto the surface the wasps are building. Also, hornets build an outside covering over the layers of cells. Image credit: Modified from Bob Peterson (A) and Mike (B)

With the above information in mind, it is unlikely the swarm of wasps in question were paper wasps. They typically have small colonies and are not very aggressive.

Yellow jackets and hornets are typically black and have more distinct yellow or white markings than paper wasps [2]. They are also more aggressive than paper wasps. Yellow jackets and hornets live in colonies like paper wasps, but their colonies are typically larger than those of paper wasps and may consist of hundreds to thousands of individuals [4]. If their nest is disturbed, they will emerge in droves. This is more notable in hornets and yellow jackets than other wasps because of the sheer size of their colonies. Similar to paper wasps, hornets and yellow jacket colonies are founded in the spring by a single queen that mated the previous fall and overwintered as an adult. The queen-to-be usually overwinters under the bark of a log [4].

Great—we’re narrowing down on our culprit. Our suspect was bright yellow and black and was present in a large swarm! We’re heading down the right path of inquiry.

With all this in mind, it looks likely that the wasp swarm in question were yellow jackets! (1) They are known to swarm like we saw, particularly when it has been wet for a few days as they can get driven out of their underground burrows. (2) They are more often seen in urban areas. (3) Yellow jackets are smaller than hornets and have more pronounced yellow stripes as our insect suspects did. (4) Last, but not least, I got identification confirmation from one of my mentors!

What a relief to have both scares over. The swarm is long gone. By mid-fall it had gotten too cold for them to stay active, and only the queen was left to overwinter in a crevice somewhere waiting to reemerge and start a new colony this spring. And I have solved the scare of being an entomologist that does not know the identification of a ‘bug’ in question!

« Single Large or Several Small? The Ongoing Debate in Nature Preserve Design
Archive
Midnight Snacks Could Be the Death of You »