“Many people make cities home – But did you know that many species of wildlife do as well?"

As of today, more people live in cities than ever before. In fact, scientists predict that by 2050, 66% of the world’s population will be living in cities [1]. A “city” can mean a lot of things to urban ecologists, or scientists that study living things within human built environments. A “city” can be defined as anything from an informal settlement of housing such as pictured below in Cape Town, South Africa, to a megacity such as Tokyo, Japan, that is characterized by dense populations within the official city limits.

No matter what type of city you are looking at, there is always some kind of “green space”, or vegetation that can provide habitat for wildlife. In fact, some wildlife, such as certain birds-of-prey, even prefer to use a human-built structure for their housing (Fig. 2). When urban ecologists study wildlife in the city, they often find surprising results. Let’s discuss four unexpected ways that living in cities affects wildlife. 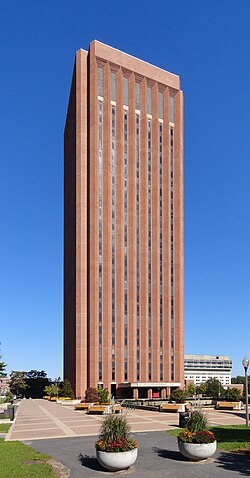 “1. More predators, but LESS of a chance of being eaten?”

Cities are full of dangerous wild-animal predators. Many studies have actually found more predators - from domestic animals such as cats to birds-of-prey - in cities than in rural areas. Yet some studies have also shown that each individual animal has less of a chance of being eaten [2]. What’s going on here? This conundrum has been dubbed the “predation paradox”. There have been several hypotheses to explain the predation paradox, such as predators switching to human-provided food sources, but no one has come up with an adequate and complete explanation.

“2. Wait…HIGHER biodiversity in town compared to the forest nearby? Sometimes.”

Biodiversity is a buzzword that I’m sure you’ve heard of if you’ve read any article on conservation or ecology. It basically describes how many different kinds or varieties of species there are in a set area. When urban ecologists describe biodiversity and human-development, they often think of how biodiversity differs along an urban-to-rural gradient. Rather than just comparing the “city” versus “nature”, they look at human-development on a continuum from dense urban centers to suburbs, rural, and then undeveloped areas. What is surprising is that oftentimes the highest level of biodiversity across the gradient is at medium levels of human development (such as the suburbs), not undeveloped areas [3]! Why is this? Well, one reason is that humans love bringing in their own set of species, either for aesthetics or for domesticated uses. These species can be ornamental garden plants or even birds that were mentioned in Shakespeare’s works (no kidding, this is why we have invasive species of European birds in the United States, Fig. 3). Although these “exotic” species add to species diversity, they can also outcompete native species or become a “pest” for humans. Despite these issue, especially when it comes to “exotic” garden plants, they can generate a ton of extra food for wildlife in the city…

Fig. 3 Many animals, such as these bathing house sparrows, persist in human-built environments…and some were introduced by us (Source: Wikimedia Commons).

“3. SO MUCH FOOD: One human’s trash is another animal’s meal.”

We humans produce a lot of additional food resources that can be exploited by wildlife. We put food waste in loose garbage cans, we leave bowls of pet food out, and grow gardens. Many people enjoy seeing wildlife in their backyard, so they set up bird feeders. Some people even feed raccoons marshmallows (please don’t do this, it’s a dumb idea that is not good for the raccoons, as demonstrated by this YouTube video). Whether intentional or unintentional, humans add a lot of energy into the urban ecosystem, allowing many species to subsist on human handouts [4]. This can cause all sorts of problems with human-animal conflicts, and can even result in wildlife that is more aggressive towards members of their own species in the quest to get the most human-generated food.

Fig. 4 Yea…don’t do this. It will not end well for either party (Source: Wikimedia Commons).

“4. LARGER populations in cities than in natural areas?”

All of this additional food can lead to some “human-loving” species that have larger populations in urban areas than in natural areas [5]. But these species tend to be common or invasive species often associated with humans, such as pigeons, skunks, squirrels, or house sparrows. More sensitive species, such as interior-forest dwelling birds, or species that occupy more specialized habitats, can be left out.

So are cities the best place for wildlife?

Yes and no. But mainly no. Due to the unique traits of urban habitats discussed above, certain species’ populations seem to be doing great at medium levels of human development. But urban ecologists have identified many problems with seemingly “successful” species of wildlife living in the city, such as easier spreading of disease, lowered reproductive success, and increased aggression [6,7,8]. Also, many more species do far better in non-urban habitats, such as old growth forests or natural grasslands. For these often rare and ecologically important species, urban-development pressure leads to their local decline and extinction. Also, even if a population of a species seems to be doing well in an urban area, we could just be seeing the lag time before the population crashes towards extinction. This lag time, called extinction debt, could be on the order of decades, and by the time we see the decline it is often too late to intervene with management or habitat regeneration.

Should we plow down all the forests and turn them into housing developments?

After reading this, you should know the answer to that question. Maintaining natural ecosystems and nature preserves are a critical way to protect more sensitive, wide-ranging, and ecologically important wildlife and the overall biodiversity on this planet. Although certain species benefit from living in cities, there are usually only a couple (typically non-native) winners, and a lot of (typically native) losers. Some species may seem like they are “winners”, because their population densities are very high, but behind the scenes their success in breeding offspring might be suffering. This often leads to imbalanced and “unhealthy” ecosystems. There are many ways us humans can help encourage healthier ecosystems in their own cities. We can advocate for preserving and adding natural habitats in the form of parks and green spaces. We can also provide the best habitat possible for native wildlife by planting native species in our landscaping and gardens. Perhaps after reading this, you’ll think more about how you can protect the wildlife and biodiversity right in your backyard.