Pistol shrimp are aptly named. Despite their small, unassuming presence, they carry with them an impressive weapon that can discharge powerful underwater ‘bullets’ capable of stunning or even killing prey.

Their built-in weapon comes in the form of a single, highly adapted, enlarged claw (seen in Fig. 1) that can crank open and snap shut with incredible speed. It looks similar to a boxing glove. When a shrimp fires this weapon, it releases intense light, heat, and sound via the formation and collapse of underwater bubbles. This reaction is one of the most fascinating phenomena in the natural world. So let’s dive underwater and explore this extreme behavior in a bizarre crustacean, the pistol shrimp! 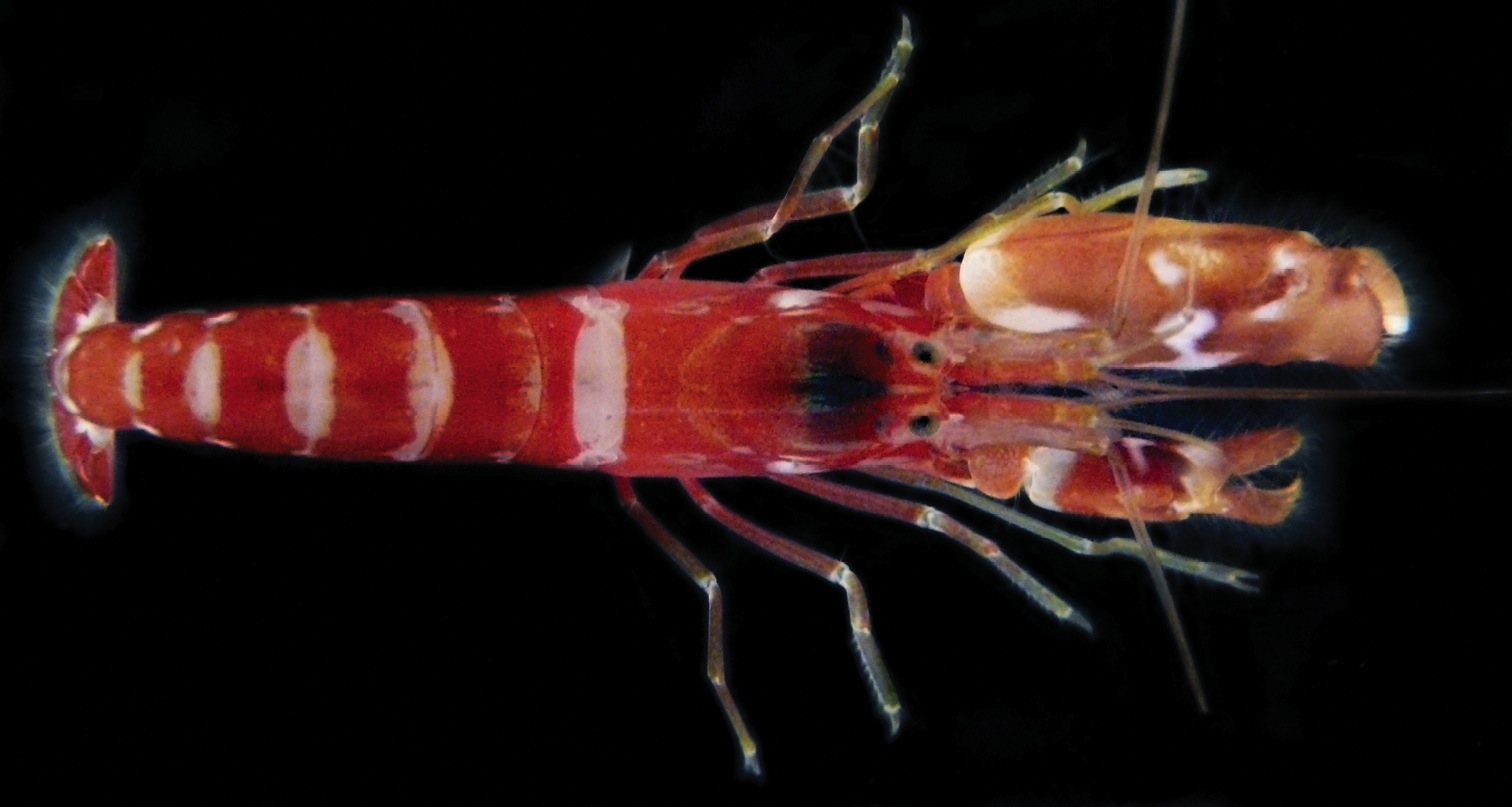 Pistol shrimp, or snapping shrimp, belong to the family Alpheidae, with over six hundred species all capable of the aforementioned violent snapping behavior [1]. They are found in shallow ocean waters throughout tropical and subtropical regions, and are often audible to snorkelers and divers near coral reefs. If you’ve ever heard a constant popping noise while snorkeling or diving, then you’ve already heard pistol shrimp ‘bullets’ being fired! It may have sounded similar to popcorn popping, burning logs crackling, or bacon sizzling…loudly. While this snapping behavior has evolved over time to serve many communication and defense functions, we are going to focus on its function in hunting prey.

The claw responsible for the infamous pistol shrimp snap (only one of the shrimp’s two claws has this capacity) has evolved away from a typical crustacean pincer in structure, and is extremely large relative to body size – it can be as large as half a shrimp’s own body length. One pincer section cocks open and has a protruding ‘plunger’ (top), while the other pincer section remains immobile with a ‘socket’ to match (bottom). When the claw snaps shut, the plunger protrudes into the socket and very quickly pushes out a jet of water from inside the bottom socket region, kicking off the cascade of events that generates the aforementioned bubble ‘bullets’ (Fig. 2.) [2].

The jet of water pushed out by the shrimp’s claw snap moves so fast (it has clocked in at 62 miles per hour!) through the surrounding water that an area of low pressure is created directly behind the jet stream, forming a gas bubble (Fig. 2). However, within microseconds, the pressure from the surrounding seawater builds so high that the bubble collapses in on itself asymmetrically, forming a cavitation bubble. The intense bubble implosion creates a loud pop! sound that sends a sonic shockwave through the water, which can stun or kill unlucky invertebrates nearby. This is called sonic hunting – a way to stun and kill prey without ever making direct physical contact – and the source sound generated can get up to 210 decibels, which is louder than a gunshot. Typical prey consist of small crabs, other shrimp, gobies, and marine worms. Luckily for snorkelers and divers, the striking distance is only about three millimeters from the tip of the snapping claw to the imploding bubble. While pistol shrimp congregate together in large colonies, they tend to keep a distance of about nine millimeters between themselves and other pistol shrimp so as to avoid accidental friendly fire [2].

Simultaneous to the loud pop!, the bubble collapse also generates an instantaneous flash of light at wavelengths that indicate extremely hot temperatures within the bubbles (up to 5000 Kelvin, or 8540°F). Researchers call this flash, ‘shrimpoluminescence’, and the associated temperatures come close to the sun’s surface temperature! The flash comes and goes within 100 nanoseconds (synced with the loud sound) and is undetectable by our eyes, but we know about the light flash from the use of a fancy tool called a photodetector that measures light by quantifying photon electricity. The flash is likely a byproduct of the insane pressure changes, temperature changes, and sonic waves emitted during the bubble implosion [3].

And it gets even better. This totally crazy biomechanical adaptation for sonic hunting has proven not only useful for pistol shrimp to get dinner on the table, but also for humans during wartime. We have capitalized on this evolutionary cacophony by utilizing the power of bubble collapse dynamics for military defense. Pistol shrimp colonies generate so much noise – loud snapping sounds all day and all night – that they actually interfere with the Navy’s ability to use sonar technology for submarine detection. In fact, pistol shrimp are credited with aiding the U.S. during World War II. United States submarines were purposefully kept amid colonies of pistol shrimp or affixed with speakers playing pistol shrimp snapping sounds, so that the soundwaves from the loud bubble snaps of the shrimp would acoustically camouflage underwater vessels from detection by sonar surveillance systems. And it worked [4]!

So next time you’re out on the water, listen for that snap! crackle! pop!, and take a moment to appreciate the teeny, tiny pistol shrimp, and the long evolutionary process that led to its extreme hunting technique.

« The Path of Least Resistance: Our Relationship with Antibiotics
Archive
You May Say I’m Biased, But I’m Not the Only One »