When you’ve got venomous thorns and you eat innocent beautiful coral for breakfast, I think you qualify as a new kind of monster.

Meet the crown-of-thorns starfish, known (rather unaffectionately) as COTS (Fig 1). 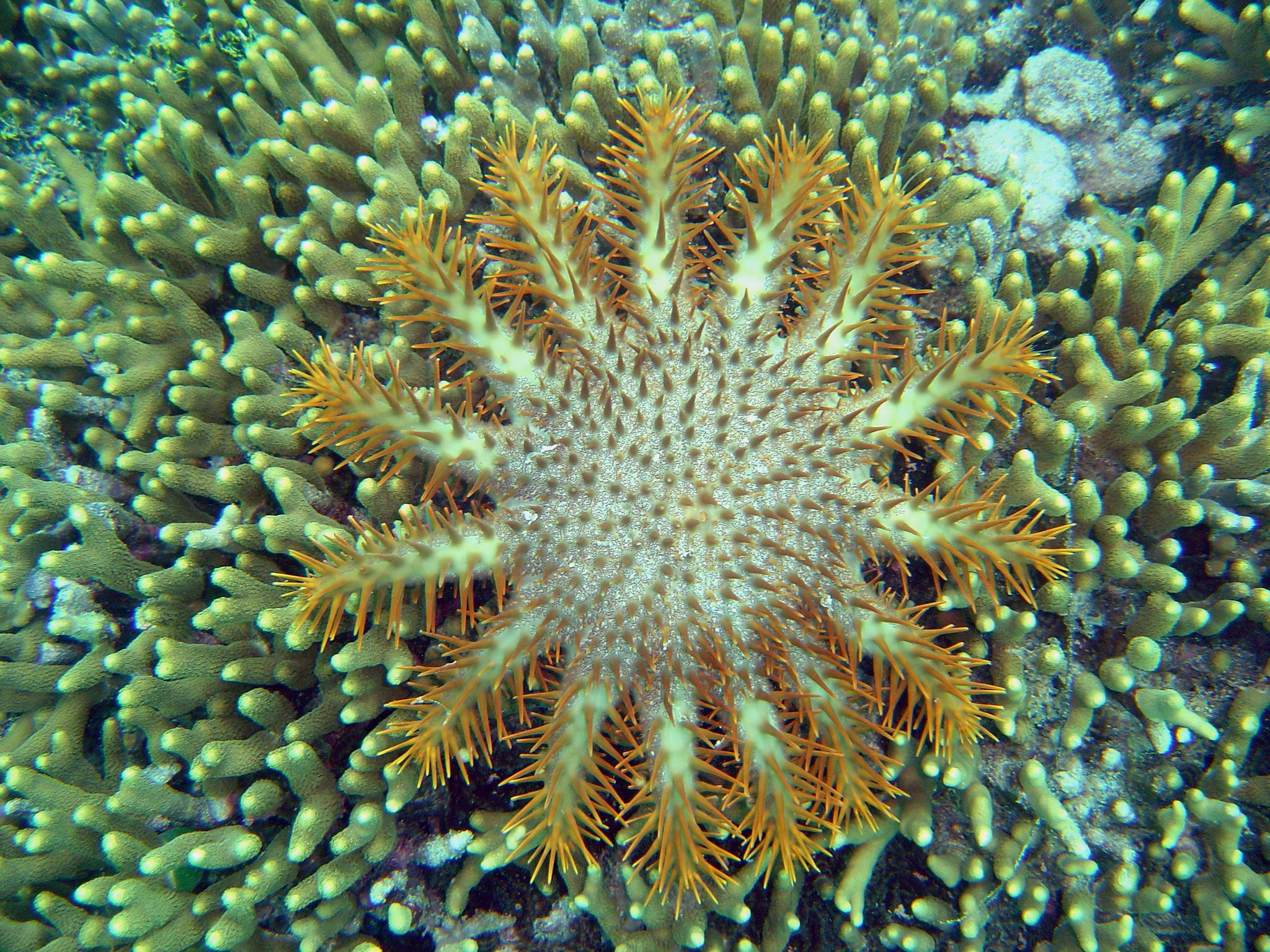 This starfish can be found throughout the Indo-Pacific wherever there are coral reefs. COTS can have anywhere from 7 to 23 arms, and every one of them is covered in large, poisonous spines (Fig 2). 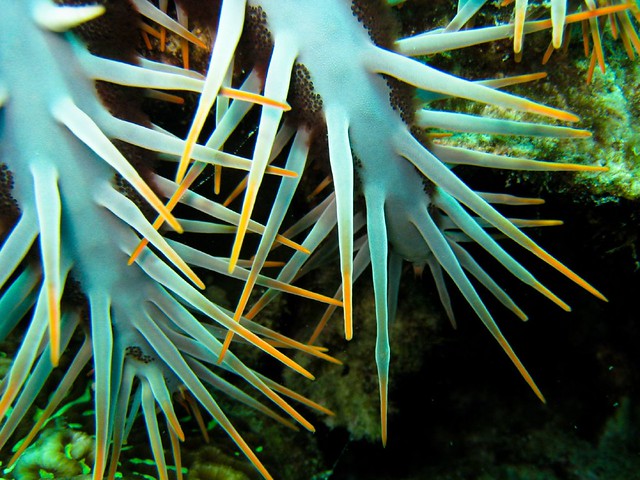 Figure 2. A closer look at COTS spines. Not really the huggable type, is it? (Source: David Ogden)

COTS have become a huge problem because they are voracious consumers of coral. These starfish extrude their stomachs to directly digest live coral tissues [1]. While this feeding is one part of a normal healthy reef ecosystem when COTS are at low densities, areas of coral fed on by high densities of COTS become white scars that are unlikely to recover (Fig 3.). Instead, these swaths of dead coral become colonized by algae, making it difficult to impossible for corals recover.

These high densities of COTS have become more evident and problematic in recent time. A single crown-of-thorns starfish is capable of producing millions of eggs and sperm in a single spawning season. This means that even low numbers of individuals can quickly reproduce to outbreak status levels (>1500 individuals per km2). Even in a healthy ecosystem there are few natural predators of crown-of-thorns starfish, including several fish species (Napoleon Wrasse and triggerfish) and the Giant Triton snail. Unfortunately, these predators have been heavily affected by the fishing and tourism industry, meaning that population control of this species is very limited. There are several other factors that may be improving the ability of COTS to reproduce in large numbers, like high nutrient runoff and climate change, but nothing has been definitely proven to drive population outbreaks as of yet. 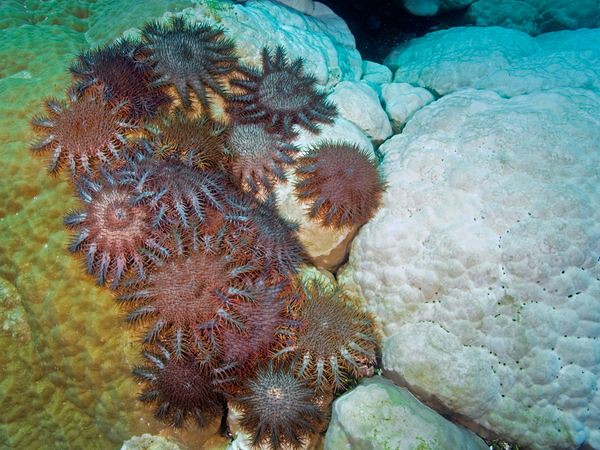 Figure 3. An aggregation of COTS eat their way through a large head of coral (Source: JesseClaggett)

Outbreak populations of crown-of-thorns starfish can kill up to 90% of live coral on a reef and a damaged reef can take over two decades to recover [2,3]. As such, the incredible biodiversity and billion dollar ecotourism industry that coral reefs sustain are at risk. For countries like Australia that have coral reefs in their vicinity and enjoy the economic and ecological stimulus a healthy coral reef brings, controlling COTS populations becomes an important issue.

Many past attempts have been made to control COTS. Initially people tried to cut COTS into pieces when they encountered them. Like other starfish, whole crown-of-thorns starfish can grow from chopped up pieces, meaning that this attempt unintentionally helped outbreaks by creating whole new legions of venomous starfish. People also tried to physically remove COTS from the ocean and bury them on beaches. This approach is incredibly labor-intensive and requires handling of each starfish several times. More recently, governments hired divers to inject COTS they found on reefs with a number of different control solutions, including ammonia, copper sulfate, formaldehyde, and sodium bisulfate [4]. Most of these have highly toxic properties, meaning their use could further damage coral reefs. Because these solutions are also relatively inefficient, each control solution had to be injected multiple times. This process also becomes very labor intensive when a single reef could hold thousands of COTS.

To improve current efforts, scientists have been working on new, more efficient methods of disposing of COTS while still maintaining the integrity of coral reefs. When I studied abroad in Australia, I worked with graduate students from James Cook University to test the efficacy of a new solution for control of COTS populations. Luckily for me, following the crown-of-thorns starfish meant getting to live at Lizard Island Research Station for five weeks (Fig 4).

Figure 4. A slightly sunburnt me enjoying the view of Lizard Island. Oh the nostalgia…

I helped with a series of experiments where we injected COTS with different doses of bile salts to see how efficient this solution was at killing individuals. We also exposed other marine organisms to injected COTS to ensure that there was no transmission of disease or other negative effects caused by the solution. Finally, we conducted a field experiment where we placed COTS on a small reef and injected them with bile salts to evaluate its efficiency in a natural setting and record other organisms that interact with the COTS remains.

Figure 5. A blueberry snorkel monster (me) holding a COTS she just collected.

In the end we found bile salts to be the most efficient solution to use to kill COTS, as we could use a lower dose and fewer injections to cause 100% mortality. By all accounts, bile salts are safe to use in the field and are a much cheaper alternative to sodium bisulfate. As a results of these studies, bile salts are now being used as a control solution on the Great Barrier Reef to curb COTS populations.

Coral reefs are in trouble around the world, but hopefully in this case science can help mitigate part of the problem. The great news is, once COTS are dead, it appears that they are easily consumed by a number of different organisms, including pufferfish. Even better news, I have a video of the COTS feeding frenzy for you (Fig 6). Live on, coral reefs!

Figure 6. A feeding frenzy commences on the deceased COTS, featuring a Starry Pufferfish.

« Lion in Sheep's Clothing
Archive
Slimed and Consumed - The Blob is Real! »