When the Earth changes, it can bring unexpected visitors.

The terror bird (Titanus walleri) invaded Texas from South America, marking its first recorded appearance in North America (Fig.1). These giant, carnivorous, flightless birds were often over 6 feet tall, and weighed over 300 pounds [1]. The intrusion would have been a pretty horrific surprise for any person living in the area, but luckily, it happened about 5 million years ago, long before humans inhabited Texas (or humans and the state of Texas even existed). Though terror birds have long since gone extinct, they were one of the first animals to make the unprecedented journey from South America to North America.

Fig. 1 A terrifying image of a terror bird. Nobu Tamura)

But what made the terror birds’ journey so unconventional?

Today, Earth’s land surface is made up of seven continents. However, these continents have moved around quite a bit since the Earth came into existence about 4.6 billion years ago. When we think of our continents on a prehistoric Earth, many think about the supercontinent Pangaea (Fig. 2), which existed about 300 million years ago. At this point, all of the continents, including North and South America were connected, and oceans did not restrict land animal movement. 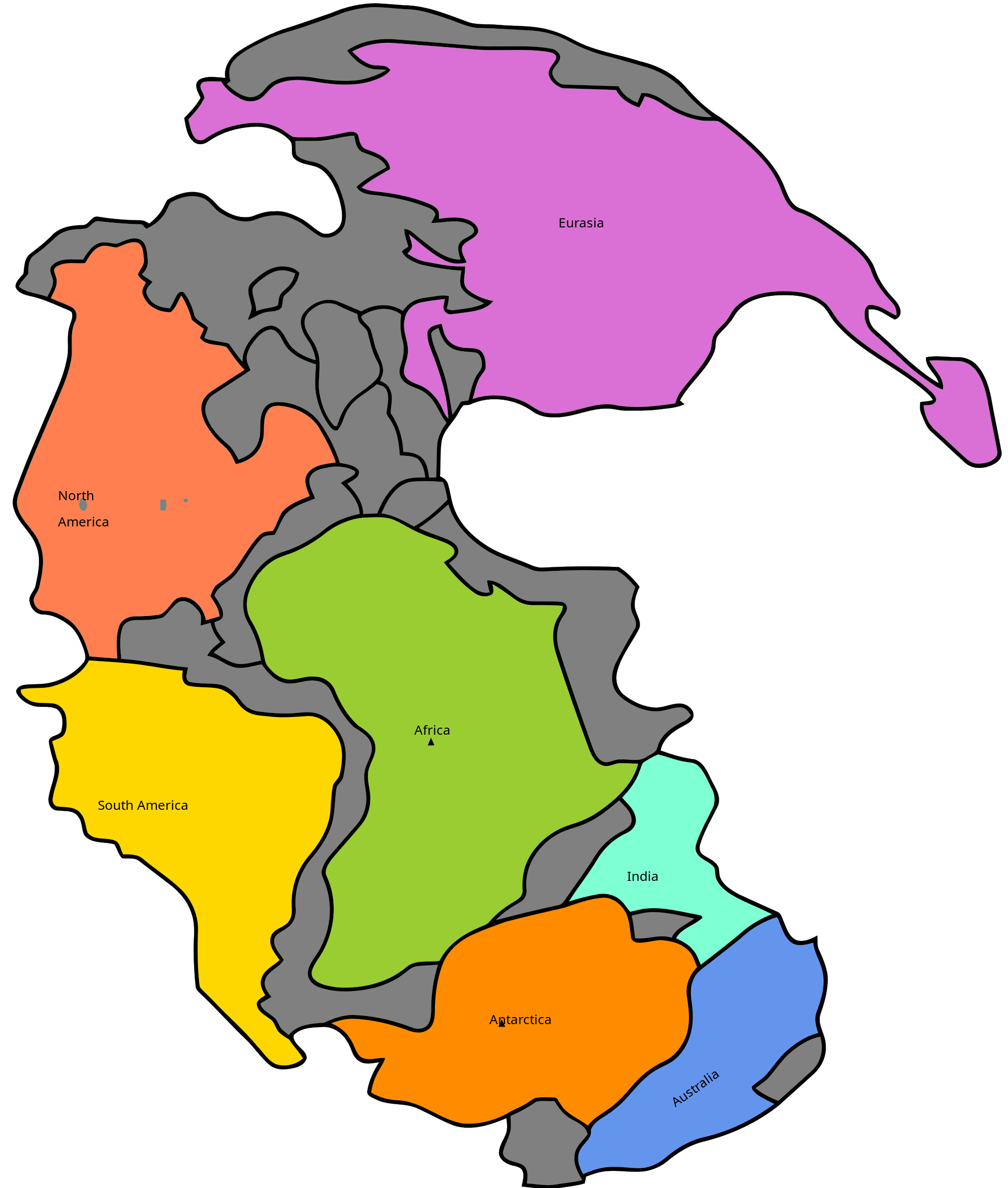 Fast forward to about 12 million years ago, and the continents were in a relatively similar position as they are now, except that North and South America were not connected. Instead of the thin strip of land we know as Panama, there was nothing but ocean. After another few million years, Panama became a series of volcanic islands, and it is suspected that the terror birds used these islands to make their way to Texas. Early travelers between the Americas are sometimes considered “New Island Hoppers” because they would have traversed today’s Panama while it still was a chain of islands [2]. After a few million years more, the islands eventually became a solid landmass; today’s Panama. And since we are throwing around so many dates, here is a timeline to help get you oriented:

The movement of species between North and South America at this time is known as Great American Biotic Interchange. While the main interchange occurred about 2.6 million years ago, animals first began making the leap between the Americas almost ten million years earlier. Some of the first animals to make the move were relatives of today’s sloths (Thinobadistes), only much larger. Unfortunately, or not depending on how you feel about sloths, they have since gone extinct in North America and their descendents remain only in Central and South America.

While giant sloths and terror birds moved from south to north, most animals moved in the opposite direction. Procyonidae (raccoon family) made the reverse trip about 7.3 million years ago and was about the size of our modern day raccoons. [2]

Some animals made the jump early, but others took longer. Many animal exchanges during the Great American Biotic Interchange happened in waves, likely when climatic conditions were most suitable. This just means that animals are more likely to travel long distances when the weather isn’t too hot, cold, dry, or wet (kind of like most people). The biggest wave of the interchange happened about 2.6 million years ago. During this time, canidae (dog-ish), hippidion (horse-like; Fig. 4), onohippidium (still horse-y), gomphotherildae (think elephant), all expanded from North America to South America. Around that time, Erethizon (a prehistoric porcupine) expanded its range northward [2].

These species exchanges continued to happen for millions of years with the last wave of the Great American Biotic Interchange occurring about 0.125 million years ago. However, species are still moving within and between these continents today. For example, armadillos continue to move north and east from Texas as climate becomes warmer in new areas of the United States. Considering that these things tend to work on the millions of years timescale, it is likely that species will continue to cross the continents to find the best available habitat for quite a while. But we can rest easy; the terror bird will not be making any more unexpected appearances.